B.C. property assessments for 2017 are now available online, and homeowners have been warned of big increases 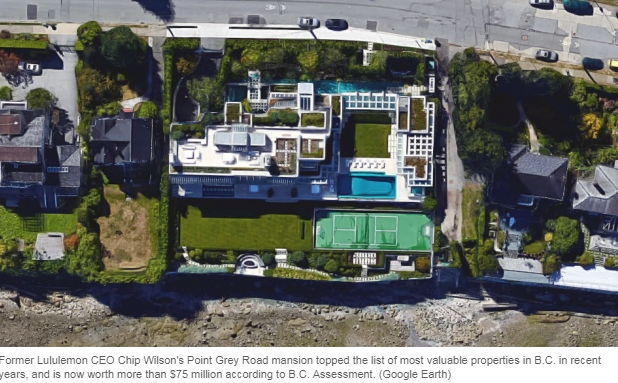 Tens of thousands of B.C. property owners have been warned about spiking 2017 assessments, and now they can check for themselves just what B.C. Assessment thinks their home is worth.

Wilson's custom-built Point Grey Road mansion has topped the list of the most valuable properties in the province since 2014.

It took five years to construct on what used to be three waterfront lots, and is described by B.C. Assessment as having:

B.C. Assessment has not yet released a list of top-valued properties for 2017.

The $75-million valuation is based on what B.C. Assessment believed Wilson's house was worth on July 1, 2016.

While July 1 is the valuation date used on all properties every year, it's notable this year because that was before the province announced its foreign buyers tax and sales began to slow.

You can look up the 2017 property assessment for any B.C. property on the e-valueBC website.

It also sent early notification letters to about 90,000 homeowners, warning they had higher than average increases.